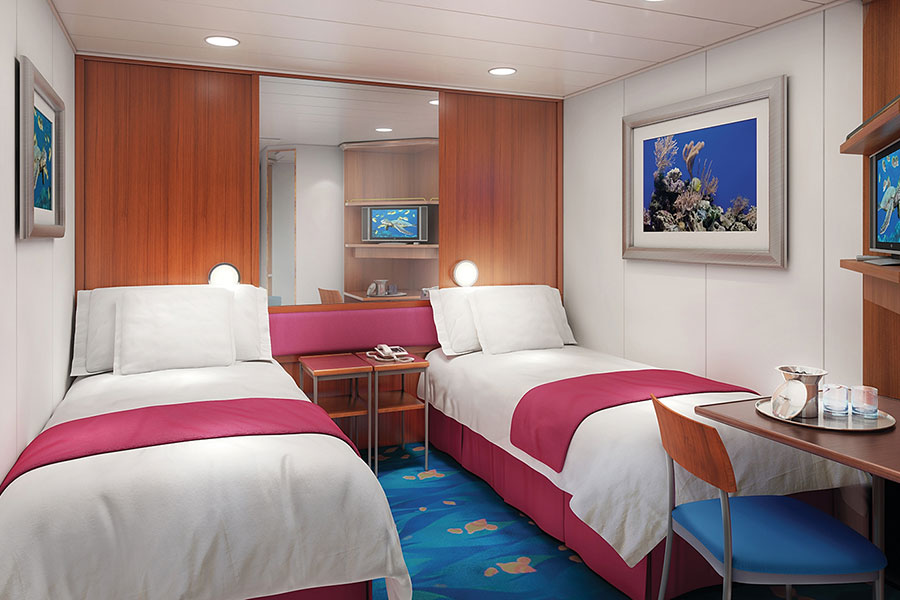 Our room had the beds pushed together. Click the photo to see a 360 view of the cabin.

Holy cow, we slept until 10:30am. The cabin is so dark!  The rooms are not luxurious or spacious, but have all the amenities that are needed.  We booked an interior room, as we really spend no time there other than to sleep.

We headed to the pool deck to stake out a seat for the Elephant Revival show. Found a great spot immediately to the left off the stage so we could see clearly straight from the side. It was really windy so the sound was about the same here as front center. These guys are all I had hoped for!  I’ll post a video on day 6’s entry.

We hung out on the deck for a while, and did a lot of reading.  Then we dropped into the Spinnaker Lounge to hear Steven Kellogg play, and watched the sun drop on the horizon.

Lazed out on the deck for a while and read again but it was quite windy. We decided to explore the ship a bit, and came across the Atrium lounge. It just so happened that Grace & Tony were due up to perform. We found seats and found them to be very good. Tony plays guitar, and Grace plays banjo, mandolin and guitar.

Next we waited for Humming House to start. They are are really good, but played to a bar crowd, so in the Atrium setting is was all about loud, and little about artistry. Not knocking them, I just wanted something less ear splitting. So we hung around for a few songs and got out for some exercise.

Our 10:30 show in the StarDust Theater is the highlight of the trip so far.  It was called the Unlikely Quartet.  Four singer/songwritiers, each doing a number in turn.  They were:

John kinda stole the show, as he is a good story teller, and arguably one of the best performers on the ship (though he was new to most folks, but we have been fans of his music for years) I had never heard Kat or Max before, and after this show, I could not wait to see them on their own stage later this week.  I’ll post videos of all three later.

The end of the second day, and it has already been worth the whole trip.  I can tell it’s going to get better, and I’m just giddy!